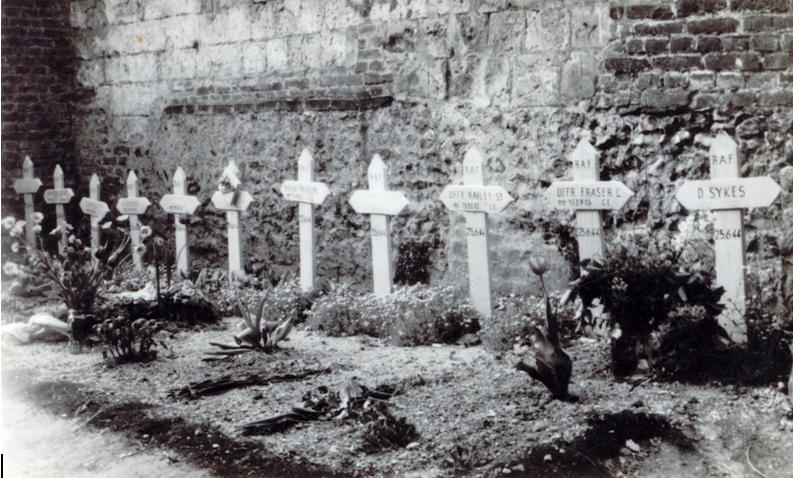 76 years ago today 102 Squadron set out on a daylight bombing raid to target a V1 Flying-bomb launch site at Montorgueil Farm.

The V1 Flying bomb, also known as the doodlebug, was developed in 1939. The first was launched on London on the 13th June 1944. At its height a hundred V1 bombs a day, each carrying 850kg of amatol explosive, were launched against the east of England in the last year of the war. It was almost impossible to shoot them down mid air so the most effective defense was to destroy the launch sites.

This was a large operation. 101 Halifax bombers took part. They had a Spitfire fighter escort and Mosquitos and Lancasters to mark the target. The Halifaxes began their bombing run at 9:29.

In a hideous accident, one Halifax released its bombs on top of another that was flying below it causing an instant explosion. One wing of the shattered plane smashed into another Halifax causing it also to break up. Both planes crashed near woods at Fontaine L’Etalon. 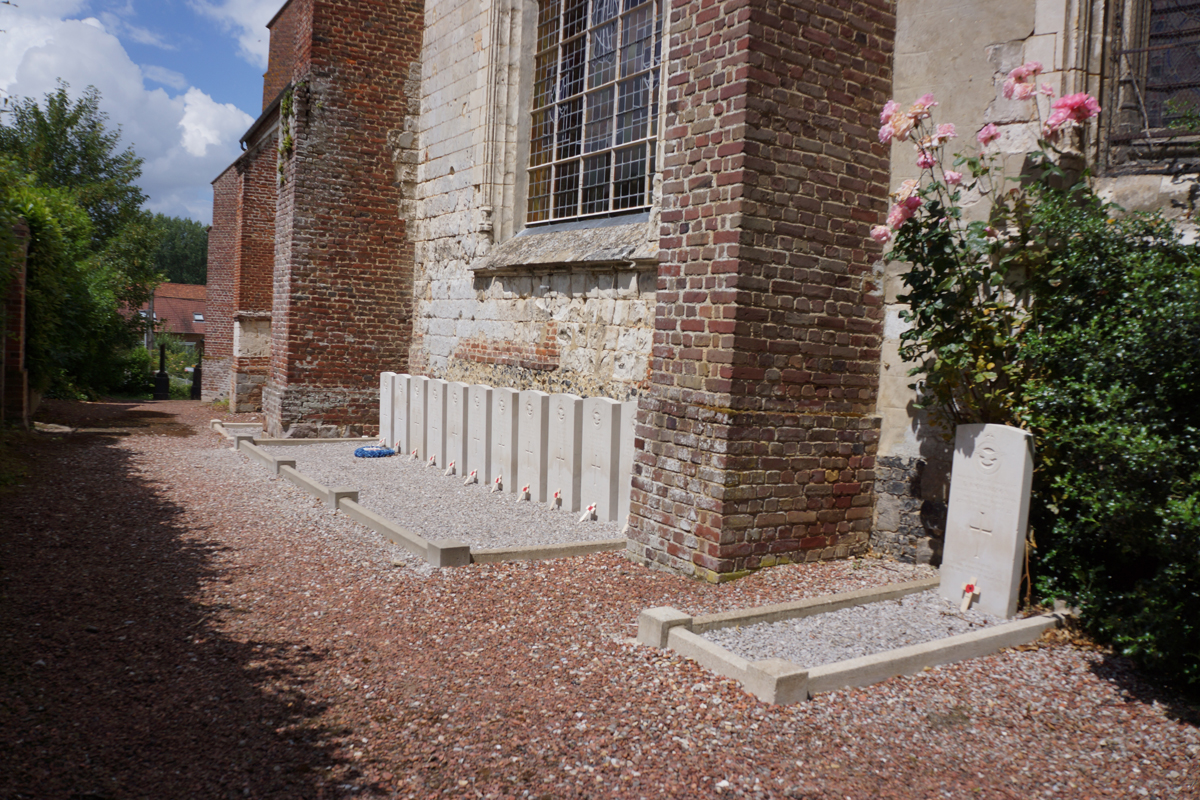 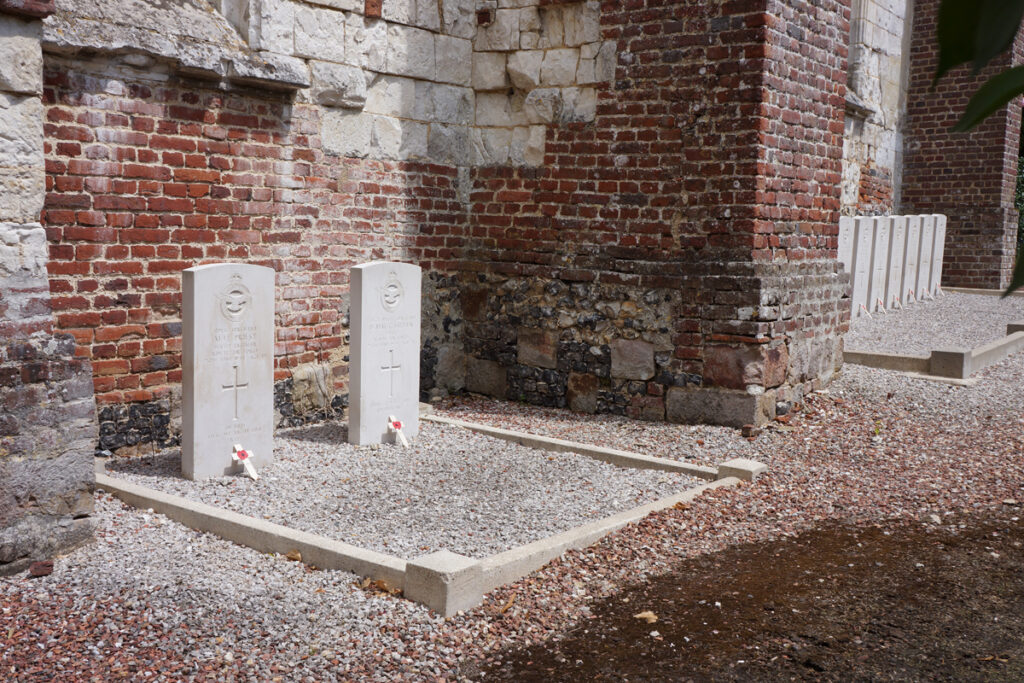 The Germans removed the wreckage and allowed the villagers twenty-four hours to find and bury the two crews. All personal effects were to be handed over and the penalties for keeping them would have been high but, despite that, villagers hid some items and returned them to the families after the war. Among those items was Derrick Sykes’ wedding ring and a commando knife belonging to Donald Stevens. These fears appear unfounded as a silver cigarette case belonging to “Bill” Bailey was returned through the Red Cross. 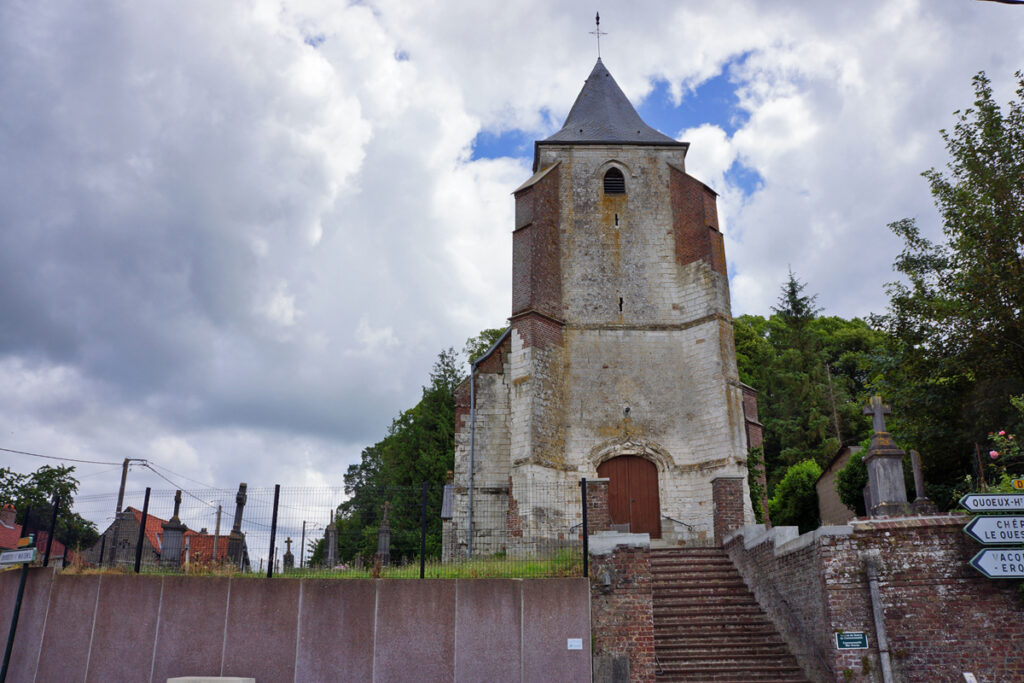 The airmen were buried beside the church in Fontaine L’Etalon and, since the end of war, there have been many visits and much communication between the villagers and the flyer’s families. 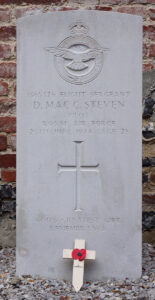 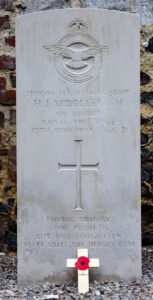 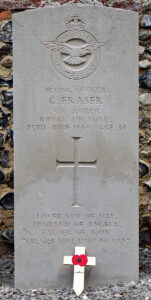 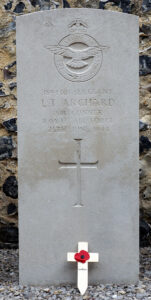 The bomb aimer realised his mistake. He was probably the only one who would have known the truth if he had not had the courage to speak up. However the official report still shows the two planes collided. As a result of this incident flying formations were changed to loose V formations reducing the risk of such an accident happening again.

As we have found throughout our time here, without exception, the graves continue to be shown great care by the local people, who have not forgotten the part these young men played in the destruction of Nazi Germany and the creation of the peace that we all enjoy today

We are indebted to the compilers of the website www.102CeylonSquadron.co.uk who have shared so much detailed information.