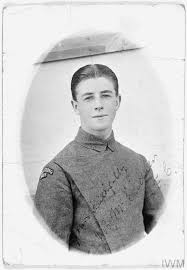 James McCudden joined the Royal Engineers in 1910 as a boy bugler but by the outbreak of war was working as an Air Mechanic in the Royal Flying Corps. By First World War standards his progress was far from meteoric. He spent two years as an air mechanic, then six months as an observer before qualifying as a pilot in 1916. He was to go on to become one of the most able and most decorated pilots of the First World War.

McCudden became commander of Nº 56 squadron, a high-achieving squadron responsible for shooting down over 100 enemy aircraft in the three months before McCudden’s appointment. At a time when birth was everything, the vast majority of squadron pilots were ex-public school, many ex-Sandhurst, and they were slow to accept this ex-ranker in command, but his skill at battle tactics and excellent marksmanship won them over and he became well respected by both fliers and ground crew alike.

At a time when new pilots arrived in France with minimal training McCudden insisted the novices practice before committing them into battle. He taught his pilots to weigh a situation before engaging in the fight, but to fight ruthlessly when required. In this way his own plane was rarely hit and he seldom lost a man from his flight. His skill and aggression, tempered with caution resulted in fifty-seven victories.

McCudden was a fine instructor and spent periods training in Britain. It was on his way back to France, this time to take control of Nº 60 Squadron, on 9th July 1918, that his plane unexpectedly crashed and he was killed. He is buried at Wavans British Cemetery.

If you’re interested to know more about James McCudden try his book “Flying Fury” finished just before he died.