17 March 2019 update – The CWGC has confirmed that these ceremonies have been postponed. We’ll let you know when they are rescheduled.

Original Post
The Royal British Legion informs us that “resulting from good original records and subsequent research by the CWGC and Joint Casualty and Compassionate Centre of the MOD” there are to be two Re-dedication ceremonies on March 24th 2020. Please attend if you can.

1. Private James McLean, 10th Battalion, The Gordon Highlanders. 11.00 hours at Fosse 7 Military Cemetery ( Quality Street ) MAZINGARBE.
Mazingarbe is 10 kms SE of Bethune. Arriving in Mazingarbe on the N43 from Lens take the first road on left. The cemetery is 200 metre on the right.
Co-ordinates. Latitude 50.46525. Longitude 2.75675. 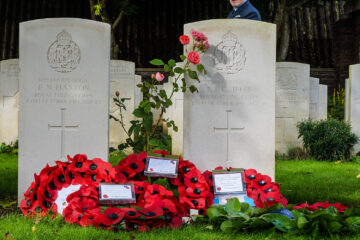 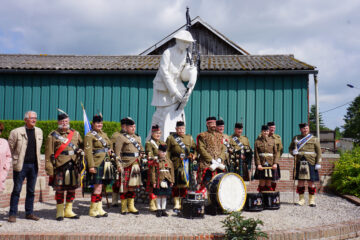 At 11:00 on the 1st July every year, in between their commitments at various ceremonies on the Somme, the Somme Battlefield Pipe Band come to Longueval to honour all the men who played the pipes Read more…